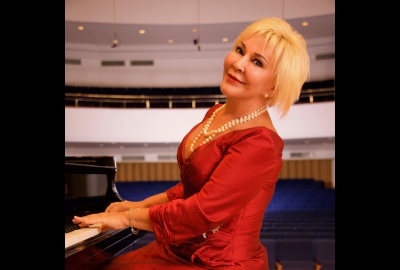 Ms. Onay, you were a pupil of Saygun and you had a chance to work with him over a long period of time. What does he mean to you? How would you describe his personality, his musical character and his identity as a teacher?

As a personality, Saygun is a real endless treasure. He had such depth and such infinite knowledge on every subject, you would realise that he was never content with learning only the surface of matters. Without 100% knowing a subject, he would never say I know. For instance he would only talk about a book if he himself knew the book as well as its writer. When he said unfortunately I don’t know him very well about an author, most probably he would have read all but a couple of his books. I take this as an incredible attribute. Those who met him would be ashamed of their own ignorance. This was actually true for every subject. For instance, someone who boasted off for being an excellent performer, composer or a conductor, upon meeting Saygun would feel very ashamed and this had no exception.

Yet there was another aspect to the matter. His attitude would totally change if you approached him as, I am sorry but I do not know this well enough. When Saygun met a talented person who sincerely wanted to benefit from his endless treasure, he then would work with that person for hours, holding nothing back and willing to convey all his knowledge. He would even spend days for this. I for one learned my lesson well from that modesty and experienced that attitude many times. For instance when I went to Paris and they said what is there left to teach this girl, I thought I still had a lot to learn. Our studies with Saygun were at a rather advanced level. He contributed to us in many different ways. Work discipline was of vital importance to him.

In short, I can say that Saygun had two faces. One was compassionate, the hard-working face of the man who wanted to convey all his knowledge and raise you; the other face, if you do not know where you stand, would put you in your place in the most frank manner. For that reason there are many people who think of Saygun as cold and remote.

His death was a great loss for me. However I continue my great relation with him through his works and I hope I do justice to his memory.

In your opinion, what was the effect of all those he had to go through, all the negative conditions on his works?

I think he perhaps kept those separate from his music. Of course, all those would have some reflections; but Saygun’s music is a complete universe in itself. He had come to this world for creating in any case and condition. He was really an extraordinary composer. We see that even though every element is present in his music, there are some elements that are not found in anybody else and that his music can be identified from the very first notes. He created very different works in his various periods. Some of them are more introvert, more elegiac; yet some are extrovert and very exuberant.

The reflections of a life lived fully…

Yes, that is very true. It must also be taken into account that after every work he created, he put all his strength and courage in creating a new work to present to the humankind. His incredible effort here is not for his own success but to serve his share in the benefit of humanity.

Have you ever worked with Saygun on performing his works? Has he ever recommended you anything or told you a wish?

In general no, but I must say that Saygun knew his own works very well. Not every composer is such, you know – in fact, I never saw another composer who knew his own works so well. This is another very rare feature. Saygun would immediately notice the changes I had made to the work while performing. Sometimes he would find it very appropriate and even make a compliment like this is now your work more than mine. He approved very much my style. At the same time, he made some very useful comments about several of his works, for example the Etudes. I learned many good things from him, for instance about pedalling and the colours you can create with it. You could even solve the issues regarding the instrument with him in attaining a musical result. He was that kind of a genius.

About the 1st Piano Concerto there are critics as, even though fluent in its energy and character, due to the intensity of orchestration, the piano is too covered. What are your opinions on this?

It certainly has an intense orchestral writing. However, it is up to the conductor and the soloist who need to find the balance and thus display the technique used in the work. I spoke with Gürer Aykal a lot about the 2nd Piano Concerto. There is serious work to be done to reconstitute the balance. For this reason, performing it is very hard.

For some of Saygun’s piano works, especially with his concertos he is compared to Bartok. Could we learn what you think of this comparison?

Saygun himself explains it like this: When you carry musical researches in certain regions, you find out that different civilizations living in the same region used a folk tune mutually and took parts of it. For this reason, such a tune can be the mutual medium of both Turks, Finns and Hungarians. When the source is the same, the similarity exists naturally, in the essence. Yet, how each composer processes it, is of course very different from one another.

Saygun dedicated his 2nd Piano Concerto to you and you premiered it. Could you tell us about the process from the composing stage until the first performance?

First of all, of course it was a very exciting event for me. That he wrote this concerto for me, made me experience very special feelings. I was so happy, so honoured that it is hard to put it in words. To cooperate in such an important task is a very special situation in my musical life. Along with this, we observe that there is much more intensity in that concerto. When you examine the Variations for Orchestra, which Saygun composed in very old age, you again find the colour of that period. The orchestration of the 2nd concerto is much more sophisticated compared to the 1st. It is a work of enormous depth: very introvert, very impressive. I think there is a melancholy close to death and also a spiritual expression…. We can feel that there.

Maybe in a certain way, he continued along the line of Yunus Emre...

Yes, I agree. Yet, we can rather say for the concerto that it was a closing phase.

Could you inform us about your recent activities regarding performing Saygun’s works?

There are really important events on the calendar this year. In May I performed Saygun’s 1st Piano Concerto with Rengim Gökmen conducting the Macedonian Symphony Orchestra in Skopje. On 6 June, again with Rengim Gökmen conducting, we will perform the 1st concerto in Wiener Konzerthaus with the Vienna Symphony Orchestra. In the United States, I will play Saygun’s 12 Preludes, Sonatina and Etudes at Gina Bachauer and Golandsky Institute International Piano Festivals as well as in my recital at the Chicago Cultural Centre. I will play Saygun’s 1st Piano Concerto with the Royal Philharmonic also; Gürer Aykal will conduct the orchestra. Of course Saygun is a constant part of my Turkey programme. Actually not only for the occasion of his centenary: I have played Saygun’s concertos in 21 countries. I have performed in 56 countries so far and in all my concerts I have always played Saygun’s works.

How were the reactions to these concerts?

Saygun was much admired in Skopje. Both the musicians of the orchestra and the musicians in general and also the audience take great pleasure in discovering Saygun. It is quite interesting that I always get the same reaction wherever I play Saygun, from Japan to the States the musicians say, why did we not come across this music before? and they feel very familiar with this music. For instance, they recognise the aksak rhythms so naturally and play them so well that it is really interesting.

Maybe they find themselves in it...

Yes. Actually that is true in every instance if the quality and the value of the music is universal. That is: any people speaking any language, from whatever culture they come, listen to this music with the same feelings and actually somewhat believing in the necessity of its presence.

Actually this music somehow reaches out to people, doesn’t it?

Certainly. The necessity for the presence of this music makes itself obvious thus. Both the performers and the audience understand that this music held a place in the repertoire for long but they just discovered it.